The Middle - Seychelles, Maldives, and India 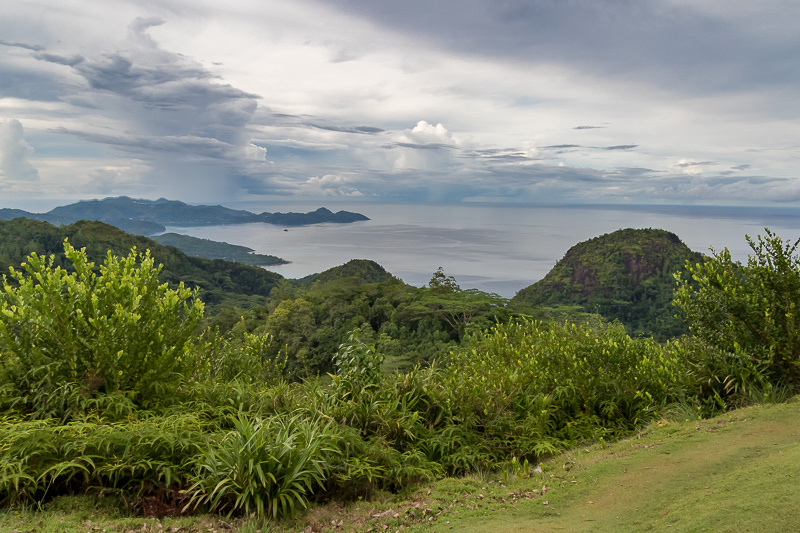 I've been slacking a bit on my blogging. I planned on making this two entries, but got behind during the transit to India. So, I decided to do one, long entry. After heading East out of Kenya, we sailed for two days, skirting the pirate-infested area off of Somalia,  to reach this mid-ocean chain of islands. The Seychelles are fascinating for a number of reasons, including the fact that they are actually a remnant of when, what is now India, broke off from Africa. A few granite mountains were left in the Indian Ocean and formed the main islands of the archipelago. The other unique aspect is that they were uninhabited by humans until the mid-18th Century. Their isolation and lack of communication with other lands resulted in a unique ecosystem that is the richest I have ever witnessed. The high granite mountains are covered with so many species of plants, that if you stand in one spot, it will be difficult to count the number of species just in your immediate view! While there are a number of unique birds, most are relatively bland. It seems that there are few predators, and the need to compete is less.  Despite the cloudy and rainy weather, we could see that this is a beautiful island with magnificent beaches. It is also a very safe place.

From the Seychelles, we sailed Northeast for another three days to the Maldives. The country is a collection of over 1,000 sandbars in the North Central Indian Ocean. The main island and capital, Mahe, is a tiny, flat, island one and a half by one kilometer and is home to 140,000 people, which makes it one of the most densely populated places on Earth. This is contrasted with hundreds of atolls, most uninhabited, surrounded by magnificent blue coral rings and centers of pure white sand. There is currently unrest in the country, and while there were tensions, we saw no overt activity during our morning walk into town, nor during our snorkeling expedition later in the day.

Leaving the Maldives, we sailed to two ports on the Southwest coast of India: Mangalore and Cochin. This was our first trip to India, so it was quite an experience. We took tours which showed us both the cities and some of the surrounding areas. Even though these two ports were relatively close to each other, the differences in culture, language, and history were striking. My one insight is that India is more a collection of states, cultures, and regions, rather than a unified country. It has a long, rich, and complex history. It is also vast is size (1.2 million square miles) and population (1.3 billion people). We saw astonishing diversity of modern industry and technology interspersed with primitive agriculture; great wealth and crushing poverty; magnificent beauty marred by ugly trash and pollution. This rich tapestry and the vibrant colors make for incredible photographic opportunities, but navigating the many cultural mores and the chaos is challenging.