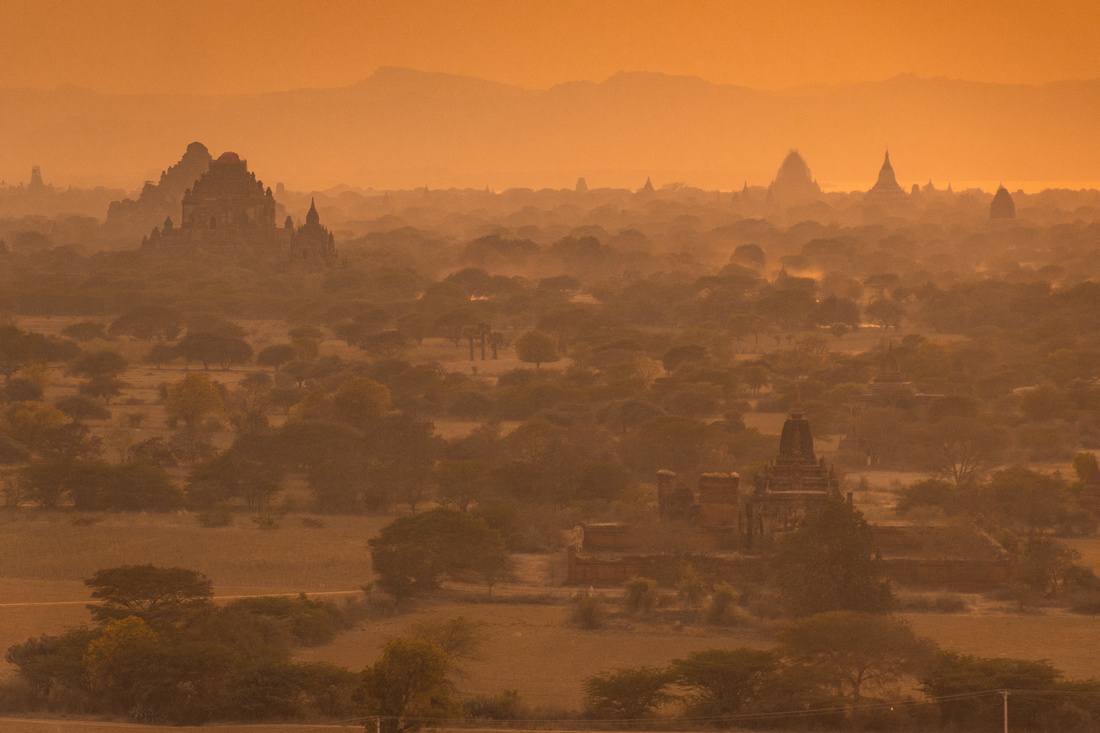 Finally, after thirty days of traveling, we arrived in Myanmar, formerly known as Burma. This was one of the two main reasons to take this trip. It is a country with a storied history and a dark, recent past. It has only been "open" for tourists in the last several years and is still suffering from a tarnished reputation. These are reason enough to visit, but the real draws are the temples and stupas that dot the country. The bonus turned out to be the gentle people of this forgotten land.

We arrived in port just before sunset and immediately headed for Yangon to see the fabled Shwedagon Pagoda by night. The pagoda and associated temples were begun between the 6th and 10th Centuries AD and were re-built and expanded over time. It now stands a whopping 368 feet tall and is covered by real gold plates, riveted in place! Doing the traditional clockwise walk around the stupa, watching the pilgrims and monks in their devotions, under a black sky and light reflected from the giant gold bell, was magical indeed. We had to leave far too soon, as we would have to leave the ship before 4 am the next morning for our expedition to Bagan.

Bagan was the capital city of the Pagan Dynasty during the 9th to 13th Century. During the early times of this period, one of the kings adopted Buddhism. Subsequently, he encouraged all of his rich and powerful supporters to build temples and stupas to worship the Buddha. The result is a collection of over 3,000 temples, monasteries, and stupas, spread over 65 square miles! It is effectively a Disneyland of Buddhist Archeology. We had fantastic tours and ended the day with a gourmet meal, by candlelight, next to an ancient temple. The dinner was followed by an Elephant Dance with traditional music. It was an absolutely magical night.

During our visit to Bagan, we met many "locals," many of whom were from hill tribes from the North of the country. Many of these people had very little previous contact with Westerners and we were very surprised at their reactions. Some would merely stare, others would reach out to touch us or have photos taken with us. One older women went so far as to shake Jane's hand! They are gentle, open people and it took us a while to overcome our jaded suspicions.

We returned the following day, arriving in Yangon in time to cast off for our next adventure.