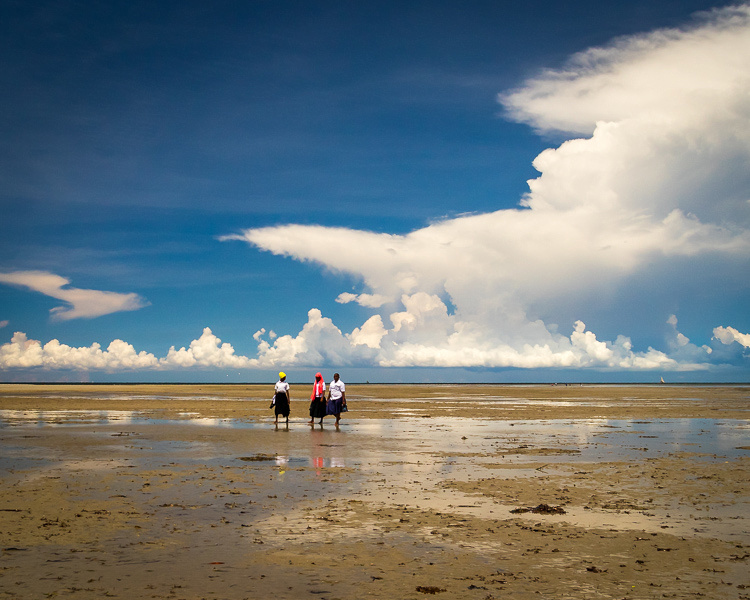 After skipping Madagascar, we continued on, up the coast of East Africa. This is a region where the culture of the native Africans met the Islamic Traders, and were shaped by the European "Protectorates" of the late 19th and early 20th Centuries. The people from the interior of the continent have migrated to the coast, where they live in crowded poverty. Our last day in Kenya, we observed the aftermath of riots caused by the government's bulldozing squatter's shops and shacks located on a major thoroughfare.

Our first stop was in Dar es Salaam, Tanzania, where we took a rather exciting tour that involved being convoyed by police escort for an hour and a half, out to the small town of Bagamoyo, along the coast. We saw 13th Century ruins of an Arab Trading Post, a Catholic church and college, and the headquarters of the German Protectorate.

The following day, we docked on the island of Zanzibar, formerly a separate country,, but since 1964 amalgamated into the Tanzanian union. Unlike the mainland of Tanzania, it is predominantly Muslim. We had an opportunity to see the rural countryside, which is largely agricultural, as well as a visit to the Jozani National park where we visited an ebony forest teeming with various monkey's, including the rare Red Colombus Monkey, and a mangrove swamp. We got to spend the afternoon walking around the ancient Arab city of Stonetown.

Our final day saw us back on the mainland of Africa, in Mombasa, Kenya. After driving through the industrial section, the poor section, and the rich section of the city, we visited what was formerly a quarry for a cement factory (still next door and still operational), that has been reclaimed as a nature reserve. They have done so in fascinating way. Rather than merely bringing in soil and animals, they brought in insects and worms to convert the rock into soil, followed by plants and other animals that would enrich the humus and they slowly built up an entire ecosystem that now houses a wide range of plants an animals. It is essentially a compact zoo and botanical garden combined!