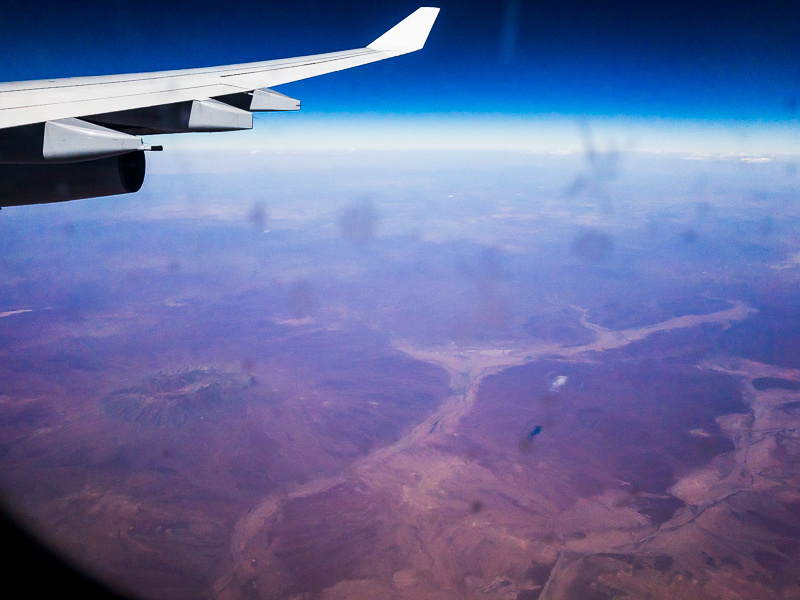 Our long flight from Frankfurt to Cape Town took us over Namibia during the late morning hours. I have always been taken by the photographs taken in Namibia by almost all the nature/wildlife photographers I have seen. On the ground it is certainly a rich source of photographic inspiration. But from 33,000 feet, you get an entirely new perspective.

Having flown over the American West many times, you realize the scale of landscape. Our photographs on the ground are but mere microscopic visions of what is a continental picture. Flying over the American West, from East to West, we see endless farms and forests nourished by broad rivers. The dominant color is green and angular lines and patterns of human civilization integrate with the natural features. Further West you see tall mountains, high plateaus, and deserts. The colors shift to blacks, greys, reds, browns, and ocher. The greens are never entirely missing, just not a dominant feature except where there are forests and rivers.

The Namibia is home to the oldest desert, with the highest sand dunes, in the world. It stretches all the way from Africa's interior to the Atlantic Ocean. The sight of a vast, orange desert bordering a massive ocean is a unique sight. The interior of the country is mountains and deserts whose only economic gain is mining for diamonds, gold, and uranium. It has a small population that is crammed into a small habitable area, resulting in one of the most densely populated countries in the world.

Having now seen Namibia from the air convinces me that I must go and photograph this country! EDITORIAL NOTE: I debated posting the above image, as it is not the quality that represents my work. But the scratched, frosted plexiglass of the aircraft window did not allow any better. I hope you will indulge me on this one image.